In February 2013, 3 months before the 13th General Elections, Najib “I am not a crook” Razak signed a pledge for clean polls which had called for:

As history have put it, Najib “I am Chosen By God” Razak broke every single item in that pledge. This was confirmed by the custodian of the pledges themselves – the Transparency International Malaysia (TI-M), whereby in April 2013, they observed that Najib had already broken his own pledge. 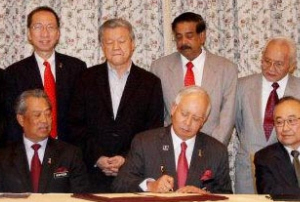 I will put on a serious face and sign this, but I have no intention to keep my pledge hehehe I will appoint Paul Low as minister to appease TI-M.

And in July 2015, it was discovered that barely a month after signing that pledge in February 2013, Najib received billions of ringgit in his personal bank accounts; violating the MACC Act many times over.

What transpired next was a series of mind-boggling events which could only be described as the darkest days of Malaysian politics. For the past 10 months, Malaysians were subjected to the worst political drama acted out by their own Prime Minister and his sycophants.

Najib created a tradition where a prime minister had no qualms to break promises, tell lies, avoid questions and reporters, avoid accountability, arbitrarily use laws to de-criminalise himself as well as firing, transferring and arresting innocent people.

‘Cash is King’ is the slogan being practised by Najib and his party; where money rules and loyalty can be easily bought. Sometimes, even intelligence and integrity can be sold for RM1 million.

This is why Najib and his party will be doomed come next general election. Unless the party can do the unthinkable; by gaining some good conscience and doing the right thing.

You may also want to read:

6) Malaysian Government debt is in excess of RM 630 billion,and at 58.6% of GDP, has exceeded the Government’s own ceiling

7) As the war cries for his ouster grow, can Malaysia’s Prime Minister Najib Razak hold on till the next election?

DISCLAIMER: Jebat Must Die carries the personal views of the blog authors. Readers are cautioned not to consider the contents written in this blog and all its ancillary documents as a legal or contracting policy advice in any way. Indeed, the information stated in this blog should not be relied upon as the ultimate reference of the truth. They are just a matter of opinion based on available facts. Since Jebat Must Die is not responsible for its contents and the comments from the public, it therefore assumes no liability. Jebat Must Die also disavows knowledge or culpability of any such acts or claims on such acts in any way related to the views and opinions expressed in this blog.
Join 4,021 other subscribers
Follow jebatmustdie on WordPress.com
Loading Comments...
%d bloggers like this: