Did you read the previous article line by line?

Before we proceed to the next part, below is the analysis from an international observer on what had happenned on that fateful week:

By Graham K Brown – Balancing the Risks of Corrective Surgery: The political economy of horizontal inequalities and the end of the New Economic Policy in Malaysia

“The first indication that sections within the MCA was willing to push a harder line for the resolution of Chinese grievances came in November 1986, when the Selangor branch of the MCA, which was headed by the national deputy president and Labour Minister Lee Kim Sai, passed a resolution calling for the abolition of bumiputera status for the Malays and the East Malaysian natives. The resolution provoked an immediate backlash from UMNO members, who interpreted it as a demand for the end of the cherished Malay ‘special rights’. Forty-six UMNO MPs wrote to Mahathir, asking him to sack Lee from the cabinet, who himself offered to resign. Whilst the rift was quickly patched over in public – the Selangor MCA withdrew the resolution and the Sultan of Selangor publicly reprimanded Lee and warned him not to question Malay special rights – many within UMNO remained unappeased, and it contributed to deteriorating relations between the parties, most notably in the virtual demonisation of Lee that was to arise later in 1987 (Asiaweek, 23/11/1986).

Tensions between the MCA and UMNO soon spilled over into broader ethnic tension with Malaysian society. Language and education issues – a political flashpoint since the days of the Malayan Union plan in the 1940s and, as we have seen in relation to the Merdeka University controversy, accentuated by the social programme of the NEP – proved to be the spark point for the escalation of tensions.

The first round of protests came in August, when Universiti Malaya instituted a ruling limiting the use of Mandarin, Tamil and English in the teaching of elective subjects. The decision provoked demonstrations from non-Malay students, who interpreted the ruling as an attempt by the administration to boost the academic performance of the Malays compared to the other ethnic groups (NST, 02/08/1987).

The ever-belligerent UMNO Youth soon waded into the controversy, criticising the demonstrators but doing nothing to prevent counter-demonstrations by students supportive of the university’s move (NST, 04/08/1987).

As the protests continued, police were forced to keep the contending groups of demonstrators apart (NST, 18/08/1987).

By October, the DAP had become involved in the protests and the police were making numerous arrests (NST, 10/10/1987).

The Universiti Malaya uproar was soon overshadowed, however, by a national level dispute, also concerning language and education, when the Education Minister Anwar Ibrahim announced the promotion of around ninety teachers who were not educated in Chinese-language schools to senior positions in government-supported Chinese-language primary schools. The promotions caused a storm of protest from the Chinese community, which saw the move as an attempt to ‘change the character of the Chinese schools’, and perhaps ultimately pave the way for their disestablishment (Tan 2000: 244).

Although Anwar quickly backed down over the appointments, Chinese opposition parties and educationalist groups continued to protest, demanding the instant withdrawal of the appointees. Again, the Chinese parties in the BN were clearly pressurised by the protests into adopting a more chauvinistic position, for fear of losing ground to the DAP. In a sensational turn, the MCA and members from other Chinese parties in the BN, again led by Lee Kam Sai, thus joined a protest rally with the DAP and other Chinese-based opposition parties, calling for a boycott of the schools involved (NST, 12/10/1987).

The boycott saw over thirty thousand children kept away from school by their parents (NST, 16/10/1987).

The cycle of protest was intensified by a series of counter-demonstrations organised by various groups with UMNO. On the same day as the MCA-DAP joint rally, some five hundred UMNO members also held a demonstration, but the primary target of their anger was their coalition partner the MCA, rather than the DAP; demonstrators burnt MCA flags and posters (NST, 12/10/1987).

Subsequently, on October 17, UMNO Youth held a rally at a disused stadium in Kampung Baru, a large Malay district in Kuala Lumpur. The rally, attended by some six thousand people, was highly chauvinistic, and the target of the protesters wrath was against the government MCA rather than the opposition DAP.

Banners called for the resignation and of Lee Kim Sai, and urged the MCA to ‘go to Hell’ (pergi Jahanam). Other banners expressed broader and often violent anti-Chinese sentiments: ‘May 13 has begun’, a reference to the ethnic riots of 1969, and ‘Soak [the kris] in Chinese blood’ (Malaysia 1988: 17).

The UMNO Youth president, Najib Tun Razak, addressed the crowd, calling for Lee’s resignation and demanding that the MCA acquiesce to government policy, or else leave the BN (Asiaweek, 20/10/1987).

By the end of October 1987, then, ethnic tensions in the country were reaching critical levels. As news spread of freak shooting incident when an army sergeant (Prebet Adam) ran amok killing one Chinese and wounding another Chinese and a Malay in the Chow Kit area of Kuala Lumpur, the centre of the 1969 riots, many people rushed to stockpile food, fearing the outbreak of rioting. Increasing public attention was focussed on a mass rally planned for 1 November to celebrate UMNO’s fortieth year, postponed since 1986 (the actual anniversary) and relocated from Johor (UMNO’s birthplace) to Kuala Lumpur. Up to a half million Malays were expected to join the rally, in what was seen by many as a show of strength by Mahathir against the UMNO dissidents (Asiaweek, 06/11/1987).

With ethnic tensions running high, however, it was feared that the rally would prove to be the spark point for fresh riots. In such a context, there was little doubt that the government needed to take action to calm sentiments and prevent an escalation of conflict.”

Now if you’re the PM, what would you do at this point?

By Khoo Boo Teik – Paradoxes of Mahathirism : An Intellectual Biography of Mahathir Mohamad

The arrests spread geographically from Peninsular Malaysia to Sarawak where local environmentalists and anti-timber logging natives were also detained. The waves of arrests, though lessening after October, continued until the number of detainees reached a peak figure of 119 in December.

Anyway, part two here is the final part where we focus on other main elements that were causing the tension culminating to the Operasi Lalang back in October 1987. 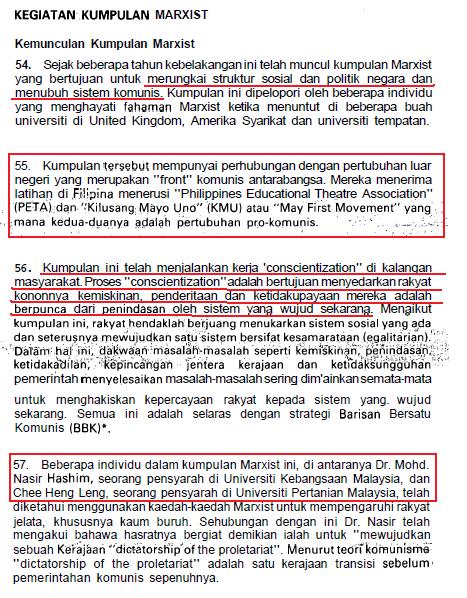 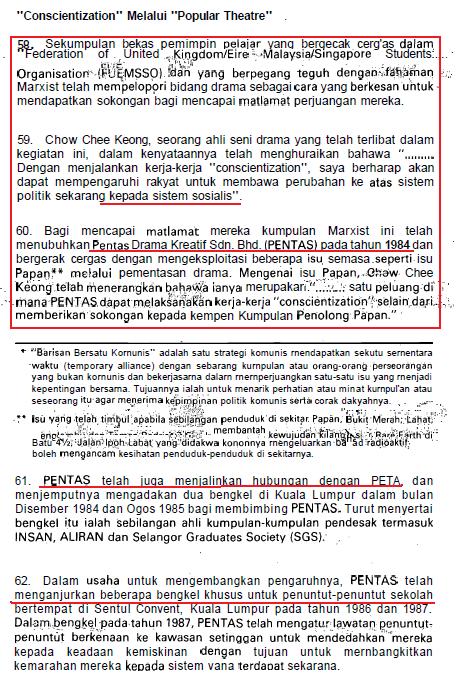 Some of these elements still persist to this day albeit in a different form or hiding behind different name.

We must be vigilant at all times because regardless what our political leanings or religion is, we must stand united against any elements that can destroy the very fabric this nation had stood for.

We must not be cowered or made to believe that things will not go out of control or pressured to accept unhindered freedom of speech as the norm in this country. Sensitivities must be adhered to. Liberalisation of the mind must always be accompanied by accountability of action which as a fledgling nation, we are not yet well equipped or mastered.

Freedom is one of the most difficult concept to control.