There was a series of simple but important questions to Arul Kanda, written by a member of the public and published in the Malaysian Insider today:

I am just a layperson trying to understand, so please forgive me if I have misconstrued.

Are we supposed to be proud of all these measures mentioned by Arul Kanda, ie. 1MDB now has a rationalisation plan, is able to pay interest charges and debt obligations on time and is selling more of its valuable assets/equities to raise cash?

How did a strategic company set up with massive government support end up talking about rationalisation plans and paying debts and interest charges every day?

Frankly, I have a problem understanding 1MDB’s business model. The company initially raised lots of debts to buy so-called strategic assets. Now it is selling these assets to pay off debts. So what exactly are these guys in 1MDB doing, really?

I thought 1MDB had obtained the assets at good value, like those at TRX and Bandar Malaysia (let’s forget the energy assets for the time being). I thought these assets would have catapulted 1MDB to stardom. But why are they carving up the lands slice by slice and selling it off to raise cash to pay off debts?

I just don’t understand, I thought most of us would want to start a corporation to make money and to create value. But in 1MDB’s case, it appears to me that the corporation started with debt rationalisation before it made anything. Now it is happy just to sell assets to pay off interest charges and debts obligations or to indulge in debt equity swaps to keep the creditors at bay.

I don’t know, all this sounds very odd to me. We incur debts to buy assets. Having done that, we should make use of these assets to make profits to pay off debts. But in 1MDB’s case, why borrow to buy assets and then sell assets to pay off debts? In between, it incurred massive finance charges. May I know what business 1MDB has been doing all these years?

I have one final question – please forgive me again if it sounds superficial. By the time 1MDB has cleared off all its debt obligations, will there be anything left to the company, notwithstanding the “assets greater than liabilities” mantra?

If it has very little or nothing left, can we then say the lands in TRX and Bandar Malaysia were given to 1MDB for nothing?

Let’s call a spade a spade shall we? This ‘rationalisation plan’ is just a fancy word for insolvency and asset stripping. 1MDB has all the signs of a company facing bankruptcy.

That is why, they had to get an outside help to pay their debt interests. Why can’t the Government be honest with this fact?

1MDB has suffered an acute cashflow problems which unable them to pay their debt interests on time. This is true in 2014 when they had to apply more than one extension on the interest payment due date. 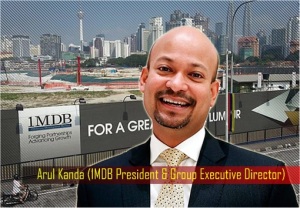 It was all over the news back then. What happens if an average man failed to pay his car hire purchase loan on time, say 3 months late? The car will be repossessed.

What happens if a business failed to pay interests on time, say 5 months late? In the case of 1MDB, they will get extensions, and get a bail out of RM950 million from the taxpayers and then, get a foreign company to pay for them more billions in exchange for the assets originally owned by Malaysians.

1MDB is actually a stinky, debt-laden non-performing giant, which could not even muster enough money to pay for their debt obligations. Yes they could pay their debts on time, but only after a few extensions and in some instances not by their own money, but through other people’s pockets.

The best part is, Malaysians gain nothing out of 1MDB. The money obtained from selling those assets will be used to pay off debts. It won’t go into the nation’s coffers or back to the taxpayers. The bankers will get the money and be smiling all the way through the next decade as 1MDB struggles to reduce the billions of debt it has amassed needlessly.

Did the management of 1MDB get the sack out of this? No, their former CEOs and BOD as well as their stupid board of advisors are happily smiling away as if nothing has happened. They trumpeted this ‘rationalising plan’ as if it was a job well done.

They are also trumpeting some gibberish notion that ‘any wrongdoing, if any will be dealt with’. That is another hyperbole which epitomises lack of accountability. How can you deal with any wrongdoing when the suspects are placed high up in the political pyramid?

From now on, who would want to do business with 1MDB? Only TNB is dumb enough to pick up the hot steaming excrement that 1MDB had left behind. Other companies dealing with 1MDB can do some arm twisting for the prized-jewels – the lands once belonged to the Government.

Plus, who could trust 1MDB when they acted so nonchalant in ignoring the rules of its own central bank? For example, do you want to invest in a UK company which had breached and ignored the rules made by Bank of England?

TK Chua above had summarised his questions in such clear manner which had exposed how stupid 1MDB really is. Yet, the Government especially the people involved in it are desperately showing signs of denial. To claim that 1MDB is a job well done, instead of a massive failure transcending leadership, good governance, commerce and rule of law is imperative for one’s political survival.

Honesty, the decency to tell the truth and be responsible for it, is truly a lost virtue among this political leaders and their corporate lackeys.

You may also want to read:

4) Malaysian Government pretends 1 MDB does not exist.Budget 2016 a worthless document for the exclusion