After the Prime Minister ditched moderation in his leadership by supporting the racially charged ‘Malay Red Rally’ last Wednesday, he can kiss goodbye to his Global Movement of Moderates.

No wonder an MP has called the Prime Minister a hypocrite and a phony.

His own division leader, that uninspiring Jamal Yunos of Sungai Besar sees nothing wrong with Umno members hurling insults such as ‘cina babi’ towards members of the press.

With this kind of loyal yet stupid sycophants propping up Najib Razak’s image, it is no longer a suprise that his leadership is getting rather strenuous and desperate. Not to mention having zero credibility in the eyes of both domestic and international masses.

This kind of unethical leadership, bordering on the belligerent, has rubbed of 1MDB in their business dealings.

For the past week, the Wall Street Journal has written two serious exposés on missing billions. The first is a missing USD1.4 billion which was supposedly remitted by 1MDB to IPIC for collateral over the now abandoned power plant partnership between them.

The second was today when it is revealed that another USD993 million was not received by IPIC when 1MDB presumably had paid them in November 2014.

1MDB’s immediate reaction is to criticise WSJ for using confidential information, and for using unidentified sources as informants and also to stand by its audited accounts.

To attack WSJ for using confidential is rather stupid since this strengthen their story that all the information received were indeed credible.

To use WSJ’s unidentified sources against them is unwise too since some ministers who had attacked WSJ using the same argument when news of billions went into the Prime Minister’s accounts were proven true. WSJ had provided verified documents as evidence and this had left those sycophantic ministers humiliated and exposed them as nothing more than a mindless stooge of the Prime Minister. 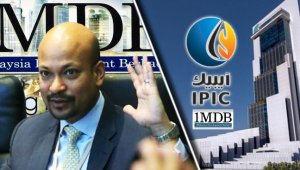 And to say that 1MDB stood by Deloitte’s audit report can be pointless against the allegations since Deloitte could not confirm whether IPIC did receive the amount. Deloitte indeed did not audit IPIC financial account.

What they could only do is to send an intercompany confirmation of balances (in the case of debtors or creditors). If the third party company did not return the confirmation form to Deloitte, there is nothing they can do to confirm if the amount tallies or existed.

If the confirmation is pending or left unanswered right before the auditor signed off the accounts, they will only insert this as a note in the audit findings report. Audit findings report is a list of accounting violations or failure in internal controls which are submitted to management of a company. It is not a publicly available report such as the final audit report meant for shareholders and public.

To digress, usually the auditor handling all these intercompany confirmations is a junior auditor. At most a senior audit executive. He/she then will report to the audit field supervisor or a senior in charge, who in turn, reports to an audit manager. An audit manager, will have to sweat through the ordeal of submitting his team audit to the audit partner – the one ultimately signing off the audit report.

Therefore, to say that Deloitte’s audit report is 100% following audit methodology and should be 100% free of fraud is a misdirection altogether.

What 1MDB should have done is to get their former business partner to issue a statement of denial. Is it so difficult for IPIC to issue such statement? To deny altogether what WSJ had published. To clearly show that indeed they have received a total of USD2.4 billions (USD1.4B + USD1B) and it is all recorded in their financial statements.

But IPIC itself under internal investigation of their own. The bosses highly associated with 1MDB, Khadem al Qubassi and Mohamed al Husseiny were removed in April and August respectively.

To cap off this debacle, WSJ had also revealed that Deloitte will not sign 1MDB audit report unless someone would have guaranteed the USD2.32 billion worth of ‘investment’ in the Cayman Islands. These investments were indeed worthless which in they end, on top of needed to be guaranteed, they were also classified as third tier assets in 1MDB’s 2014 accounts.

Enter IPIC, the ever willing partner to the rescue. Otherwise there will be a huge hole in the 1MDB accounts. We wonder what is the price for getting IPIC to guarantee such amount.

That USD2.32 billion could not stand on their own as Deloitte had some problem ascertaining their real value. Furthermore, it is not in the form of cash.

The previous auditor, KPMG was sacked precisely because they refuse to sign the accounts over this matter.

The initial amount of money had disappeared during the PetroSaudi – 1MDB joint venture which was terminated in 2010. It was initially a USD1.83 billion of cash which was pumped into PetroSaudi for a period of two years since 2009 under the pretext of loans to PetroSaudi.

Not sure what kind of units are they because as a minister, I have no idea. Please don’t ask me tough questions.

This money changed in nature many times and revalued upwards between themselves to the final amount of USD2.32 billion. Ultimately, even the Finance Minister 2 could not answer properly what is the nature of this investment.

In total, there are USD4.23 billion (USD1.83B + USD1.4B + USD1B) suspiciously missing at the moment, amounting to approximately RM16 billion of Malaysian money.

We are now getting bits and pieces of information regarding the RM42 billion of loans unaccounted for. And it is sad that the truth came about from third party and documents from suppressed investigations. We wonder what information the public could have gotten if the investigation teams were not dismantled.

Will somebody stand up and be responsible for this financial fiasco?