Although this blog has little confidence in the audit findings by the Auditor General on 1MDB, we shall nevertheless give it the benefit of the doubt.

But only if we know beforehand, what will the AG be auditing on.

For every audit, there should be a pre-determined scope of work and terms of reference before the audit can be executed.

As for the audit on 1MDB which was announced so many times by the Prime Minister, what are the scope of its work and the tasks it being asked to do?

Does any minister sitting in the cabinet know about it? Because, this is very important.

Malaysians want to know if the so called AG Report will be comprehensive enough and wide enough to answer all the questions raised by the people for the past two years.

For instance, can the AG investigate how the PM’s stepson had allegedly bought multi million dollar apartment in New York and financed the production of a multi million Hollywood movie? All these were suspiciously accomplished after 1MDB’s money amounting to USD700 million was remitted to Good Star Ltd in 2009.

With little trust given by Malaysians towards the leadership, and the admission by MACC that they are powerless to probe the mismatch of income and assets on any individuals unless preliminary investigations have been carried out, the importance of this upcoming AG report cannot be underestimated.

With so many bright and intelligent cabinet ministers, some even graduated from prestigious universities around the world, we would assume they are competent enough to know what are the parameters and deliverables of the Auditor General in auditing 1MDB. 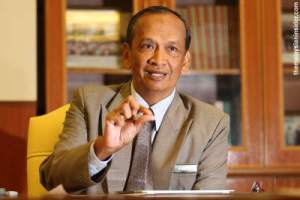 The man behind the AG report (Tan Sri Ambrin Buang). Will the scope of work cover everything?

Because God forbid, if the AG Report fall short of unearthing the answers we had asked, then we do not want to hear the cabinet ministers whining and admitting that they got to know the pre-determined scope of work ONLY DURING the presentation of the report. That would be grossly incompetent.

Therefore, what is the scope of work and terms of reference of the AG Report?

In a news report last month, the PAC had revealed that the AG’s terms of reference is determined by the Finance Ministry. Thus, can the Finance Minister who happens to be the Advisor of 1MDB governs how the AG should investigate? In Malaysia, where the public (and the politicians) are ignorant, it is sad that issues on this conflict of interest do not arise.

The same news report stated, “if the scope of work is to only determine and verify the figures that are already in the annual reports of 1MDB, the Auditor-General cannot do a better job than what has already been done by the fund’s current auditor – Deloitte. Also, there is no deadline set for the report to be ready.”

Again, what is the exact scope of work? This should be made transparent to the public.

The Cabinet has meetings frequently. Can any ministers tell us if the Auditor General’s scope of work is comprehensive enough? What are they? Should a forensic audit be needed? And if it does, will that take till the year 2017 to complete?

The last thing we want is for the Prime Minister and his entire cabinet destroying the credibility of the Auditor General with incorrect terms of reference and vague scope of work to begin with.

8 thoughts on “1MDB: What is the scope of work of the Auditor General report?”