The Prime Minister issued his latest FAQ which yet again did not answer any of the questions posed to him.

We would have thought that he could at least explain what exactly the cash/paper assets/units fiasco all about since he is also the Finance Minister and the Advisor of 1MDB. But he did not.

In fact, when it is concerning 1MDB, the PM (or maybe his coterie of failed consultants) are desperately spinning the issue further.

Indeed, some of the allegations that have been made have no grounding in reality, for instance Tun’s claim that I am responsible for a loss of RM42 billon on 1MDB’s balance sheet. This appears to be a deliberate twisting of the facts as 1MDB has not made a loss of this amount. This is the amount of its total debt; debt that is far exceeded by the company’s assets of RM51 billion, as audited and confirmed by Deloitte. Most large companies around the world have high levels of debt, there is nothing unusual about this.

In the first place, Tun never claimed that there was a RM42 billion loss in 1MDB. He said, and every rational people in Malaysia agreed that the RM42 billion loans 1MDB took are unaccounted for and some may have been lost. Disappeared. Vanished.

Surely the Prime Minister must not think that Tun and the rest of fellow Malaysians are too stupid to discern between the words ‘loss’, and ‘unaccounted money lost’?

In Bahasa Malaysia, lost is ‘hilang’, ‘lesap‘. While the word loss means ‘rugi’. 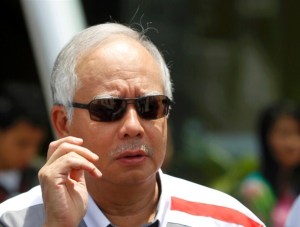 Q: Where is the RM27 billion?
A: Sultan Pahang supports me

The fact that the Prime Minister is deliberately trying to mislead the people in his own FAQ while accusing Tun as twisting the facts is so ironic, we just had to smile at this sheer foolishness.

Nobody ever said that 1MDB is suffering a P&L loss of RM42 billion. People were asking, if the assets bought was RM15 billion at cost, while the loans taken was RM42 billion, then where is the balance of RM27 billion?

It does not matter if 1MDB has assets worth RM52 billion. The truth is in the pudding. If 1MDB is having a really strong balance sheet, then why the need to borrow from MOF, nearly RM1 billion in standby credit last March and RM2 billion from a billionaire last February just to pay off its loan interests?

What happened to the often repeated mantra – ‘there is nothing wrong with 1MDB, they have billions of cash and a lot of assets’?

He (Tun) also claimed that I do not answer issues surrounding 1MDB, but I have gone beyond that – and instructed the Auditor General to conduct an audit of 1MDB, the results of which will be presented to the bipartisan Public Accounts Committee. This should ensure that the process is transparent, and all questions that have been asked of the company are independently answered by legitimate bodies rather than politically motivated sources.

Enough with the AG report already please. Going beyond answering, but veering the topic by saying you have instructed the AG to audit 1MDB is still not answering the questions!

Why are we, the questioning people, being treated like an idiot by this Prime Minister?

Simple questions like, ‘who is Jho Low?”, or why did 1MDB enter into a JV agreement with Petro Saudi and its contracts signed just within 3 days without any due diligence done before accepting the dubious ‘oil exploration rights’ in exchange for USD1.5 billion in equity?

The Auditor General could never answer these two questions let alone other tougher questions. Yet, the PM is asking people to wait for the report. What can it prove? Just like 1MDB’s external auditor, the AG report might prove nothing. There are so many unscrupulous companies that had obtained good, unqualified audit reports from external auditors throughout history.

And who are these legitimate bodies independently answering questions about 1MDB? Please don’t tell us, it is all those dubious Facebook accounts set up just to defend it? What credibility do they have? Are they the staff of 1MDB? Are they getting paid by the Prime Minister?

1MDB should be answering the questions themselves, on daily basis. This is crisis management 101. But the Prime Minister himself is telling the people that external bodies are answering on behalf of 1MDB. How incompetent!

There is also evidence that the Prime Minister has no clue to what the role of external auditors is all about when on May 18th, he stated:

“Auditors will not sign if even RM1 million is missing. Now it is said that RM42 billion has vanished. How can it vanish? It hasn’t vanished, there are assets, there are liabilities.”

The auditing community had a good laugh when the PM said that. In reality, when auditing  billion ringgit company like 1MDB, the auditors will not even check something relatively miniscule as RM1 million.

Auditors use sampling method, and materiality testing. There is no way auditors can audit anything 100%. Their audit opinion and report even stated that.

And on top of it all, obviously the RM42 billion loans can be seen in 1MDB’s accounts. It is there for all to see in the balance sheet. It’s called historical accounting. But the money is vanished, obviously used up by unknown people (unknown at this point of time). How can we make ourselves clearer to this clueless PM?

It is sad to see how an embattled Prime Minister is desperately trying to hoodwink the people into supporting him. Worse, his efforts to defend himself fall flat on his face due to the incompetent advisors surrounding him.

Perhaps the Prime Minister need to apply the bullshit indicator onto himself first before giving out further FAQs.