He had since 2013 to answer the allegations himself but waited till last month to order the investigations, and now hiding behing AG and PAC as if these two are a pair of judges that must not be questioned while overseeing a trial.

He said in his blog:

Firstly, the Auditor General and PAC are not the judiciary where there will be a ‘contempt of court’ if anyone, including the Prime Minister should answer the questions regarding 1MDB. As it is, there are a few feeble attempt to defend 1MDB in the media, namely Salleh Keruak and a few facebook/twitter accounts set up by the PM’s social media office.

Secondly, and this is quite perplexing; why would the PM need a detailed explanation on 1MDB when he is actually for all this time holds two other posts (as FM and top boss of 1MDB). Is he not accountable for the operations and management of 1MDB? It is after all, a 100% subsidiary of Ministry of Finance.

This only exposed him as the most lackadaisical Prime Minister who has been ignorant of grave issues that are happening under his nose.

The PM is after all, the most legitimate of all sources. But he wasn’t sincere in giving us the truth for the past couple of years.

Thirdly, and this is confirmed by an auditor friend in a Big Four firm – Auditor General will not find anything wrong in 1MDB’s accounts because, just like the international audit firms that had been auditing 1MDB, it will be bound by auditor’s scope and procedures. And these procedures will audit on form, rather than substance. To put it in layman’s terms – it will not audit ‘intention’ of a transaction. It will only audit the procedures of the transaction.

For instance (we start with the easiest for now):

1) Who is Jho Low and why is he dictating the business and acting on behalf of 1MDB as proven in the hacked email correspondence between him, 1MDB and the middle eastern business partners?

Most likely answer in AG report: Our investigation found nothing unusual in the accounts as all transactions are approved and signed by the relevant parties and had authorisation by the Board of Directors of 1MDB.

2) Why are the IPPs bought in 2012 at a price more than its market value and paid higher than normal commission rate to Goldman Sachs (at 10%) for the issuance of subsequent bonds?

Most likely answer in AG report: The purchases were done according to proper Board resolutions with friendly parties a.k.a. accredited valuers being called to get the market value of those assets. Payment of 10% to Goldman Sachs were done accordingly and the appropriate banks have confirmed its remittance.

(as the Chairman of the Board of Advisers, the PM could have easily gotten the answers for this since 2013 but of course he waited until 2015 and will let the AG report answer on his behalf)

3) The valuation report on the oil exploration reports in Turkmenistan and Argentina received only on 29th September 2009, a day after 1MDB’s joint venture deal with Petrosaudi was signed. 1MDB put in USD1 billion for the JV yet Petrosaudi put in USD1.5 billion of dodgy ‘oil exploration rights’ which revealed on hindsight, did not exist at that point of time. On the same day of signing, Petrosaudi asked 1MDB to repay the 3-day loan worth USD700 million which Petrosaudi had ‘supposedly’ given to the JV company on 25th September. The questions is.. WHY to all these?

Most likely answer in AG report: We could not get the 3rd party confirmation from Petrosaudi regarding those transactions but all the paperwork seemed to be in order. The Chairman and the shareholder of 1MDB had sighted the paperwork and given their approval in September 2009. We deem the transaction as immaterial as total number of assets in 1MDB is worth RM52 billion while the money unaccounted is less than 10% materiality level.

(good luck in explaining this one)

4) According to 1MDB accounts, at least RM7 billion was deposited in Cayman Islands by 1MDB through its many vehicles. But this has been denied by the Prime Minister during his delayed telecast interview last month. So where is the money? 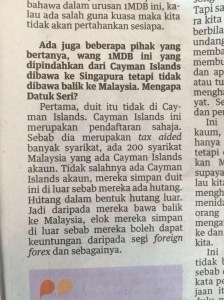 At first he said the money is not in Cayman Islands, but in other places.

And he said the money will be brought in when the time comes. So where is the money located?

Most likely answer in AG report: 1MDB have safely assured us by way of director’s statutory declarations and   gave us enough comfort that the monies are there in the accounts although it is beyond our scope of work to check into 3rd party accounts such as Good Star Ltd and Petrosaudi. Overall, the 1MDB accounts is deemed true and fair and have followed all the relevant accounting regulations and standards.

There you go. The reasons why the AG report might not find anything. The PM is just buying off time by getting the AG to audit 1MDB’s accounts as an excuse to get a breather from all the questions asked. The issue is larger than just its accounts. It’s about governance, abuse of authority and corruption. This is precisely how Arthur Andersen gave a good audit report for Enron back then. Unless forensics audit is done, or MACC is brought in then the AG can never find anything at fault with the accounts. Either way, neither party can gain any credibility if the sitting Prime Minister still hold the post of Finance Minister and Chairman of Advisory Board of 1MDB while investigation is ongoing.

One thought on “The AG’s report will not find anything wrong with 1MDB. Here’s why..”