The emasculation of Umno Youth wing is complete. As of today, not a single official statement or action on Ngeh Koo Ham’s remark over the appointment of an MCA legistlative member of Dewan Negeri in Johor has been heard or seen from the Umno Youth.

What is more pathetic for Umno Youth is the fact that it was Shen Yee Aun, a former member of DAP Youth (currently an MCA member) who launched a campaign and police report against Ngeh Koo Ham for insulting Sultan Johor. The Facebook campaign might not be entirely effective to get the recalcitrant and unrepentant Ngeh Koo Ham to apologise to MCA, BN and Sultan of Johor but at least it is doing SOMETHING.

Where is Umno Youth?

Busy high-fiving the groupies in the social media? How are the support from the Pakatan fanboys? Will they vote for Barisan Nasional next time around?

Anyway, this article is not really about Umno Youth.

True colour of DAP is showing

This came about because the Sultan of Johor wanted the state BN to appoint an MCA representative into the state legislation body to represent the chinese. In the end, Tee Siew Kiong, the Adun for Pulai Sebatang, declaring that he is a Johorean through and through will head the Tourism, Domestic Trade and Consumer portfolio.

The Sultan of Johor, irrespective of what MCA had pledged before the election had decreed that the state must have a chinese representative from the winners of the state government.

That was a magnanimous act by the Sultan.

Ngeh Koo Ham on the other hand, deemed it appropriate that the chinese in Johor must not have any representative in the state assembly. To him, the opportunity to disparage MCA over an act that is not only fitting, but morally right for the chinese in Johor makes more sense than to discard petty politics for the betterment of the rakyat.

Unfortunately, his outburst exposes another tendency of the DAP to disrespect the monarchy all these years.

In reply for his tweets, Ngeh Koo Ham said that he wasn’t being disrespectful to the Sultan. His vitriol was intended to the MCA. He added “he had no intention to question the monarchy. He accepts the monarchy system and will not question their sovereignty.”

This is double speak indeed. If Ngeh Koo Ham accepts monarchy’s supremacy then why do you question the MCA? If it was the DAP, they had to do the same, won’t they? Since they won’t question the monarchy anyway.

But the question remains, is Ngeh Koo Ham propagating MCA to decline the Sultan’s request? Did Ngeh Koo Ham decline his Datukship when the Sultan Perak decided to give him one in 2008? Of course he did not although there was an instruction by DAP top leadership not to accept any Datukships.

And he had the cheek to add – “this is not about the Sultan, this is about MCA’s decision so MCA has to determine their own decisions. And after a decision has been made, they will have to live with it.”

Precisely. It is a decision BY the MCA. And why would a busybody from DAP poking his nose where it does not belong? Is Perak inside Johor? No.

MCA on the other hand, had decided to send Tee Siew Kiong on leave until the matter is fully resolved. That is how they will deal with the matter of principles. The situation is delicate. What is important is to look after the people of Johor. Why do we need to see a politician from another state giving jibes when there is no need for one?

Therefore, Ngeh Koo Ham must unreservedly apologise to the Sultan of Johor for that uncouth remarks, and apologise to MCA as well as the Barisan Nasional in general. There is nothing wrong in trying to represent the people in the state assembly. If the chinese do not want to vote for MCA and do not want to have a representative in the state, this royal malay sultanate that began in the 16th century will ensure that the chinese will still be taken care of.

Whatever Ngeh Koo Ham tries to spin his answer, it doesn’t change the fact that Ngeh Koo Ham is a fine example of politics ala DAP. They have no respect for other people than their own selfish quest to berate their political foes, regardless the situation or consequences.

DAP nevertheless will come out with a statement that they will respect, honour and preserve the royal institutions in this country. Just like how they say they will protect Article 153, 152 of the constitution regarding the Malays’ special position. But a quick glance at their vision and mission of their party reveals otherwise. Clearly, they will abolish the bumiputra status that is enshrined in the Constitution. It is already stated in their policy statement.

This is DAP. A snake trying to lull the unsuspecting victims. And who are the victims? The ignorant masses. 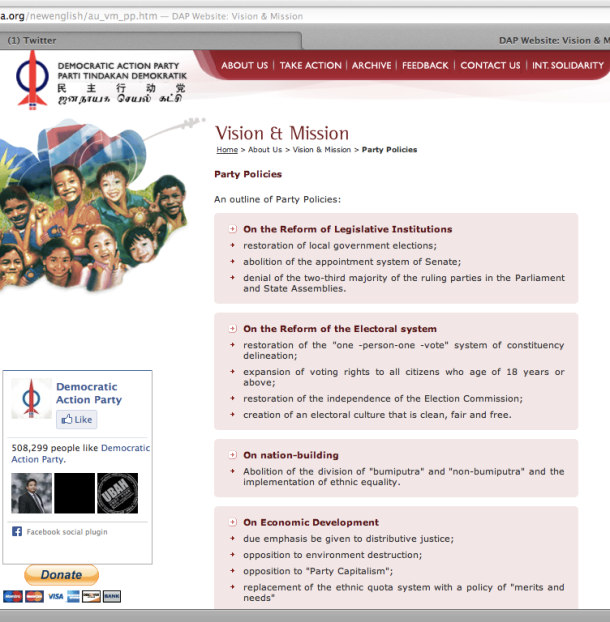 DISCLAIMER: Jebat Must Die carries the personal views of the blog authors. Readers are cautioned not to consider the contents written in this blog and all its ancillary documents as a legal or contracting policy advice in any way. Indeed, the information stated in this blog should not be relied upon as the ultimate reference of the truth. They are just a matter of opinion based on available facts. Since Jebat Must Die is not responsible for its contents and the comments from the public, it therefore assumes no liability. Jebat Must Die also disavows knowledge or culpability of any such acts or claims on such acts in any way related to the views and opinions expressed in this blog.
Follow jebatmustdie on WordPress.com
Loading Comments...
Comment
×
%d bloggers like this: