We heard so much news about the failed bid of Balfour Beatty consortium for the past few weeks.

Parti Keadilan Rakyat had not been shy in organising weekly press conferences to disseminate information to the ignorant public about the alleged abuses of power and corruption that are plaguing our country. All these apparently are committed and perpetuated by the Umno (not Barisan Nasional) government.

PKR’s ever loyal lackey, Rafizi Ramli has been given the unenviable task of exposing all these alleged corruption which almost always would land him in hot soup. This is due to the fact that all his exposures were either done unethically or the facts he presented were flimsy at best and filled with conjectures or with extrapolation of assumptions.

The latest episode is about the Ampang line LRT extension project which was according to PKR, was initially won by Balfour Beatty consortium. It was reported in his 13th July press conference that Balfour Beatty is the best contractor for this job.

Rafizi has repeatedly accused the prime minister of interfering in the tender bid and granting the multimillion contract to George Kent, which had scored one of the lowest points in the technical and commercial evaluation for the project, but has not shown proof until this week.

This was despite an earlier decision by Putrajaya to award the multi-million ringgit rail project to Balfour Beatty-Invensys Consortium, which Rafizi said was best qualified for the job.

He implies that there is something wrong with the tender process and accused the Prime Minister as intervening the selection process. His main contention was how could George Kent be given the contract and not Balfour although the latter apparently scored higher than the former in the tender evaluation process.

He is astonished that contractors recommended by Syarikat Prasarana were not selected by the Ministry of Finance’s Tender Committee. Furthermore, Rafizi assumed that the selection of contractors can be done at the whims of MOF. This had riled him up and PKR as a political party is not happy with it, to the point of making this an election issue.

Hence they are making so much noise due to the fact that a contractor had lost the contract to a rival company.

But it is equally astonishing that Rafizi and PKR did not even utter a word of protest when in one of the initial rounds of the tender process, Balfour Beatty was rumoured to receive this contract eventhough a South Korean consortium (PDA Consortium) were highly recommended by Prasarana.

An average observer can note that Rafizi had been silent about this issue a few months ago. Especially when his favourite contractor seemingly got the contract. But that changed a few months later.

His first press conference came in late June 2012 when, like a jilted lover, lambasted Prime Minister for snatching the contract right under Balfour’s nose and giving it to George Kent consortium. 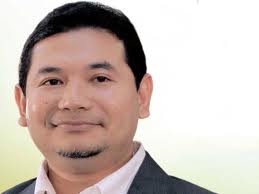 We would like to believe he is honest and selfless

Thirdly and this is quite tedious, superficial and superfluous; George Kent has a partner which had made business transactions with one of the business partners in a Scorpene deal more than 10 years ago. A professional consultant that advises the tender process, Halcrow even said that “it is not confident that the George Kent consortium can carry out the project”.

In actual fact, George Kent – Lionpac is one of the 28 companies that submitted their tender documents and pre-qualified for the job. Balfour Beatty – Ingress consortium is another company that had a chance to win this job.

Notwithstanding the points received by the Korean PDA consortium, George Kent received 38.62 out of 70 points on technical. All participants of the tender must meet the passing mark of at least 35 to qualify for the next stage. Notably, Balfour Beatty scored higher. And at this point of time, Geroge Kent was third lowest bidder out of 8 shortlisted.

Ostensibly, George Kent failed the financial aspect (scoring 8.7 out of 30 points) but this was due to late submission of evidences on their financial strength and position. When their cash and funding position was finally evaluated by MOF, George Kent eventually scored higher financially and passed in that aspect. This fact was neglected by Rafizi and PKR and was not included in any of their press conferences.

Therefore, it is unfair to say that George Kent do not deserve this project. In fact, when the project was awarded, George Kent made statements to rebut all the allegations that it is not worthy of such project. In the end, the cost of the project given is even similar to what Balfour was rumoured to bid; at RM956 million.

We all know, and this can be the same in all states, Pakatan or otherwise, that the winner of a tender process is not necessarily the ones that received the highest mark or bidding with the lowest cost.

It is also a moot point to delve into the role of Halcrow in the tender process although it is quite strange to see that the role of giving independent advice on the tender process went to a company which had a lot of business ties with Balfour Beatty. Maybe Halcrow had declared this beforehand and the MOF sees nothing wrong with it. Moot point.

Please note that Prasarana is 100% owned by the MOF and it is only logical that all strategic decisions are made by the shareholder. And selection of contractors fall within the ambit of shareholder’s powers.

Now, what is it about Balfour Beatty which made them receive an utmost support by PKR? The answers could lie in Balfour’s main partner in this consortium – Ingress Corp Bhd.

Ingress’ chairman and chief executive officer is none other than Datuk Rameli Musa. He was Anwar Ibrahim’s schoolmate back in the MCKK days. He is so close to Anwar Ibrahim, he got a grand exoneration and support from the former deputy prime minister against the accusations thrown by Raja Petra back in 2008.

Moreover, Rameli Musa is a fellow trustee in a foundation headed by Anwar Ibrahim. Who knows what other connections he might have. Back during the dizzying heights of Anwar Ibrahim as Deputy Prime Minster, Rameli Musa was vice chairman of Sapura and is reported to be a ‘confidant’ of this glorified heir apparent of Dr Mahathir.

“We lost that contract by only this much”

Obviously with all these connections and the fact that the whole of PKR, with Rafizi as the spokesperson of Anwar Ibrahim are busy defending Balfour and wrongly excoriating Najib just because another company was awarded the project, the coincidence of Ingress – Balfour – PKR cannot be denied. Arguably, Anwar Ibrahim’s LRT project could have been key to fund Pakatan Rakyat’s war chest.

We truly want to believe that Rafizi and PKR are being selfless in trying to expose any wrongdoings by the federal government for the sake of the people. We do want to see that Rafizi could at least present a truthful and honest facts devoid of any ulterior political motives. At the very least we would love to see Rafizi win a debate convincingly.

This remains to be seen.