I read with interest what Mazlan Aliman of Association of Felda Settler’s Children (ANAK) was going to do regarding the listing of Felda Global Ventures Holding (FGVH) to the public.

I actually attended the launch of prospectus in Dewan Perdana Felda on 31st March 2012 where it was hoped that the IPO will change the lives of Felda settlers and directly bring about a more efficient and expansive operational values for the whole group.

Prospectus is more than 945 pages thick

The prospectus itself is a gigantic book which I can safely assume, only the most technical gifted could scour and cover all the important information contained in that book and comprehend them. Yours truly could only grapple with a few salient points and had a few help from investment banker friends, people from Felda and a lawyer just to understand the gist of the prospectus. I had to, since I was entrusted by few relatives whose parents were Felda settlers to look into their foray with this whole IPO venture from the start.

Hence I am quite amused when one Mazlan Aliman, the president of ANAK made a press conference saying that the prospectus had misled the public. His point of contention was that “(FGVH) is passing off land that it does not actually own, land that will not be given to it as asset by state governments” .

He went further by saying that:

“the matter is even more contentious considering that Pakatan Rakyat state governments have said that they would not release parcels of Felda land under their jurisdiction. Even the governments of BN-led Perak and Johor were also ‘not ready’ to give up the Felda land under their jurisdiction. Anak was also doing checks on about 18,000 hectares of settlers’ land that were “without titles” in Negri Sembilan, which was also included in the prospectus. The prospectus lists 327,730.06 hectares of land, including 66,438.60 hectares that did not have titles. These include close to 25,000 hectares in Kelantan and about 240 hectares in Kedah.”

Actually, since decades ago, Felda received about 800,000 hectares from the government (this was during Tunku Abdul Rahman’s time). Out of that, 500,000 hectares were given to settlers. But in the 1970’s, when the government wanted to give out further 300,000 hectares of lands under the settlement scheme, there were no takers as the new generation at that time did not want to take it up. They’d rather work in urban areas or in big cities at that time.

Thus settlement scheme was stopped and the balance 300,000 hectares of land were managed by Felda itself. This is the 327,730.06 hectares mentioned in Mazlan’s press conference yesterday. The settlers’ lands or ‘tanah peneroka’ are not touched by this IPO venture at all. Please look at below’s table: 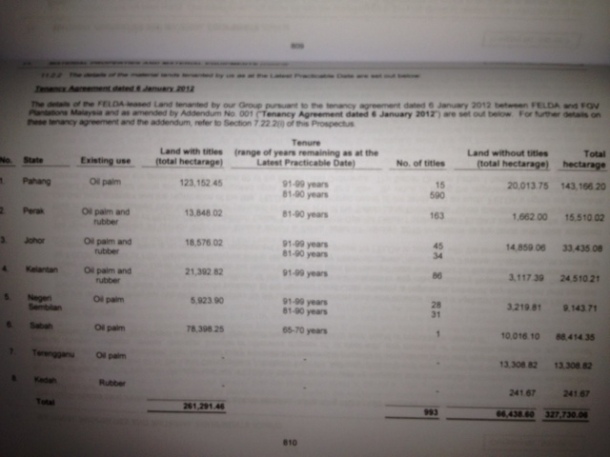 Page 810 clearly states ‘tenancy agreement’ at the top of the page.

Thus I believe Mazlan Aliman LIED to the public during his press conference yesterday. Even the 18,000 hectares of lands without titles in Negeri Sembilan were erroneous. It is only approximately 3,000 hectares.

Land without titles simply means the title of the lands were not issued yet by the Land Department and if any of us are familiar with how Pejabat Tanah works, the land titles could take months before there are issued out.

Therefore, I am not so sure as to why Mazlan Aliman wanted to make an injunction to stop the listing this Thursday when he was the one misleading the public with his twisted facts and half-truths in the first place.

But this is not surprising as Mazlan Aliman is a PAS leader and had even contested in the general elections. It is to the benefit of Pakatan Rakyat that the settlers and the public in general see that this IPO falls flat on the government’s face. But to deny the settlers of a good deal just because of a narrow and selfish political agenda of Pakatan Rakyat? Moreover, doing it with lies and skewed propaganda? And Mazlan calls himself a leader in an Islamic party? I believe they have achieved the lowest of depths in political lynching.

I do hope Malaysia Kini will rectify Mazlan Aliman’s false claims and incorrect assumptions. Perhaps this time Malaysia Kini can prove itself to be neutral after all.

On another note, yesterday’s results of FGVH’s first quarter was very encouraging when revenue increased to RM1.719 billion from 1.688 billion recorded in the last quarter although profit before tax decreased  to RM280.8 million as compared to RM495.2 million in the corresponding period last year.

I suspect the decreased in PBT in this quarter as compared to the corresponding quarter is mainly due to the tenancy agreement signed last January and other IPO-related expenses. Insiders noted that the tenancy agreement itself is costing FGVH a whopping RM47.5 million per year to Felda. Hopefully, the operational costs remain low and will not jeopardise the efforts in years to come. The world is watching. And our national pride is at stake. Hence, it is in everyone’s interest to make this work.

23 thoughts on “IPO of Felda and its naughty detractors”