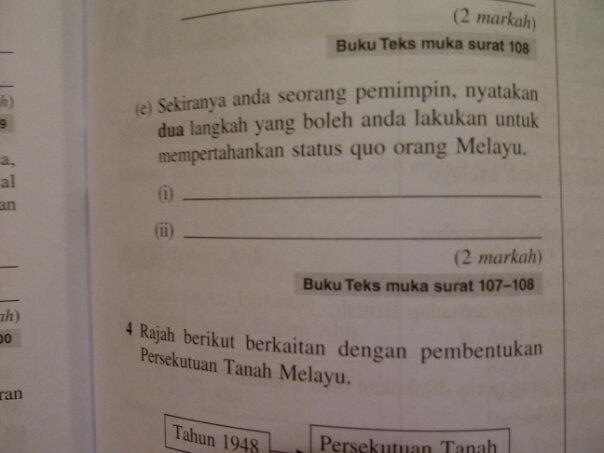 A question allegedly from a Form 3 History workbook

This snapshot is currently making its rounds in Facebook pages. And many people are aghast with this type of question and criticise it as against the spirit of 1Malaysia.

To the masses that feed on sensationalised issue and unable to think beyond the typical knee jerk reaction, this question was deeply riled as a racial and political plot to promote the much maligned ‘Ketuanan Melayu’  dogma.

If people would dare to apply their common sense and step back and breathe for awhile, the question posed was in the context of Malayan Union and the struggle of Malayans against their British oppressors.

Obviously the exploits of Datuk Onn Jaafar was learned by all of us and kids these days are not excluded from learning the history of Malaysia.

Done? What have you answered if you were Onn Jaafar? What would you do in order to maintain the status quo of the Malays at that time in the face of being colonised formally by the British through the Malayan Union?

Don’t know? Are you not Orang Malaysia? Why are you offended with this type of question in the first place?

It is part of history.

The snapshot above is from a History subject. It is not a subject about 1Malaysia or current affairs or current political studies.

This is History education.

I wrote sometime back which greatly emphasised this exact issue:

History as a subject has two pronged objectives. One, to instil patriotism into the heart of every citizen from their childhood stage. Two, as source of knowledge on their surroundings and how they perceive their world.

In America, History was a touchy subject for the people especially with the advent of multiculturism among its people. With the influx of foreigners and the calls for equality among the afro-american movement, history as a subject was a sensitive issue indeed.

For example, how do you reconcile the fact that George Washington, the founding father of United States of America, has many black slaves and treated them harshly?

How can one see Abraham Lincoln as one of the greatest President the United States had ever had but at the same time he ‘supported projects to remove blacks from the United States’ and said that ‘blacks could not be assimilated into white society and rejected the notion of social equality of the races’?

Multi-culturism pose a big threat to the learning of a country’s history because history in the eyes of each community living in a particular country is different from one another.

Was the Great Settlement of the Mid West by the white colonials in America a great human achievement for the whites? Or was it a mass extermination of the native Red Indians and their way of life by the europeans?

So what if George Washington owned slaves? So what if Abraham Lincoln was racist?

Each and every American out there reveres them both as the founding father and a great leader based on their achievements alone and what good they had brought to the Americans even centuries after they had passed away.

In other aspects, the native Americans in the USA are very patriotic regardless what happened to their people in the past.

Back in Malaysia, we hear so many negative opposition from the people who are against the subject of history made compulsory in schools. This is precisely because their views came from the racial angle.

All the prejudice, the stereotyping, the paranoia are the by-products of segregated education they experienced in their early childhood. At the very least, their views were contaminated by the very people that champion the need to segregate our children.

In the end, history is being promoted by these clustered group of people as evil and should not be taught to our children. We see so many unsavoury characters in the cyberspace trying hard to re-write history based on fiction and malicious motives.

In any case, like how the Americans are accepting their history, Malaysians must accept their country’s history from the eyes of Orang Malaysia.

The need for racial posturing when it comes to history must be stopped. Only desperate politicians would look through the racial lense and try to skew history to further their agenda for power. People must not look at history as if it is a disease that must be eradicated.  – Full article here.

16 thoughts on “A plea for common sense”

DISCLAIMER: Jebat Must Die carries the personal views of the blog authors. Readers are cautioned not to consider the contents written in this blog and all its ancillary documents as a legal or contracting policy advice in any way. Indeed, the information stated in this blog should not be relied upon as the ultimate reference of the truth. They are just a matter of opinion based on available facts. Since Jebat Must Die is not responsible for its contents and the comments from the public, it therefore assumes no liability. Jebat Must Die also disavows knowledge or culpability of any such acts or claims on such acts in any way related to the views and opinions expressed in this blog.
Follow jebatmustdie on WordPress.com
Loading Comments...
%d bloggers like this: