That is the gist of his latest article. The opening few paragraphs of this latest barb from old John Mallot is basically telling us that this country is on the verge of a racial calamity. From his plush writing table in the United States, he is saying that Malaysia now is far worse than the terror we endured back in 13th May 1969.

I read his article while having lunch with a few friends just now. I must say, I was in complete fear for my life! Malays and chinese/indians were terrorising each other. Few cars and buildings were on fire.

Hundreds died and injured in the many racial skirmishes that went on and on in the city centre just now.

I was on the verge to rush home and pack up in order to leave Kuala Lumpur when the nice chinese waitress smiled at me and asked if I wanted any dessert. No tension there.

You see, what I described above was exactly what Mallot might have been thinking while writing his article below.

Maybe he should take a look at the mirror and comment on his country’s own problems.

To John Mallot, Anwar Ibrahim is a liability that is bringing down your own credibility, if you have any left.

All the issues he brought up in his article had been dealt, mitigated and put to rest.

To the readers, I leave it to you to read the full text below. We must always be wary of foreigners who tries to stir racial tension in this country. After all, Malaysia is not their country. They will not lose out if anything bad happens to us.

Sadly, we find that even our own countrymen are helping them to fan this bigotry amongst us. If we persist in giving more opportunities for anti-nationalists like these to discredit our country, we may find ourselves facing the complete anarchy that is now Egypt. Like the columnist Shamsul Akmar of The New Straits Times, one of the few able writers that I seldom miss reading, had written a few days ago –

The next question is, if Mubarak had danced to the tune played by Washington, why is it that the US seems to be abandoning him today?

As in the case of other leaders who had been stooges of the US, their continued rule had always been without popular support and when uprising occurred, there was nothing much Washington could do to stop the tide.

The next best thing for Washington is to abandon the leader who had outlived his usefulness and start “nurturing” a new stooge.

As it is, there is a lot of suspicions that Omar Suleiman, the vice-president appointed by Mubarak last week, is with the approval of Washington and Tel Aviv.

In that sense Malaysia has been lucky to not end up being dependent economically on the US.

It could have happened in 1998 if Malaysia had turned to the International Monetary Fund and World Bank, both bodies whose policies and strategies are tailored to suit that of the US.

But it did not. But it could, maybe the next time Malaysia is saddled with another crisis.

And there is always a tin-pot American stooge wannabe waiting for the opportunity.

Malaysia, too, is not devoid of such candidates.

Malaysia’s national tourism agency promotes the country as “a bubbling, bustling melting pot of races and religions where Malays, Indians, Chinese and many other ethnic groups live together in peace and harmony.” Malaysian Prime Minister Najib Tun Razak echoed this view when he announced his government’s theme, One Malaysia. “What makes Malaysia unique,” Mr. Najib said, “is the diversity of our peoples. One Malaysia’s goal is to preserve and enhance this unity in diversity, which has always been our strength and remains our best hope for the future.”

If Mr. Najib is serious about achieving that goal, a long look in the mirror might be in order first. Despite the government’s new catchphrase, racial and religious tensions are higher today than when Mr. Najib took office in 2009. Indeed, they are worse than at any time since 1969, when at least 200 people died in racial clashes between the majority Malay and minority Chinese communities. The recent deterioration is due to the troubling fact that the country’s leadership is tolerating, and in some cases provoking, ethnic factionalism through words and actions. 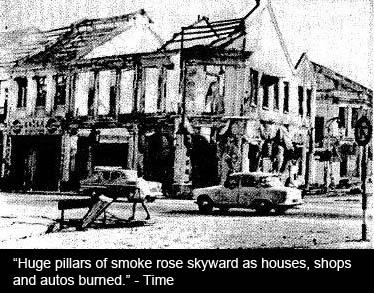 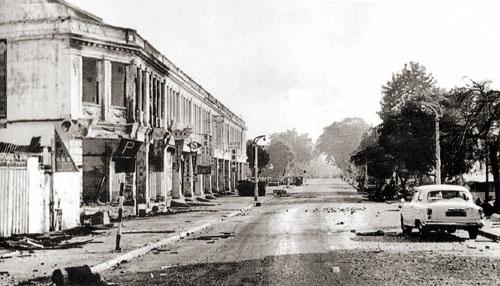 A Kuala Lumpur street is deserted after curfew was imposed during the riots in 1969. This picture was taken two days after the May 13 clashes.

For instance, when the Catholic archbishop of Kuala Lumpur invited the prime minister for a Christmas Day open house last December, Hardev Kaur, an aide to Mr. Najib, said Christian crosses would have to be removed. There could be no carols or prayers, so as not to offend the prime minister, who is Muslim. Ms. Kaur later insisted that she “had made it clear that it was a request and not an instruction,” as if any Malaysian could say no to a request from the prime minister’s office.

Similar examples of insensitivity abound. In September 2009, Minister of Home Affairs Hishammuddin Onn met with protesters who had carried the decapitated head of a cow, a sacred animal in the Hindu religion, to an Indian temple. Mr. Hishammuddin then held a press conference defending their actions. Two months later, Defense Minister Ahmad Zahid Hamidi told Parliament that one reason Malaysia’s armed forces are overwhelmingly Malay is that other ethnic groups have a “low spirit of patriotism.” Under public pressure, he later apologized.

The leading Malay language newspaper, Utusan Melayu, prints what opposition leader Lim Kit Siang calls a daily staple of falsehoods that stoke racial hatred. Utusan, which is owned by Mr. Najib’s political party, has claimed that the opposition would make Malaysia a colony of China and abolish the Malay monarchy. It regularly attacks Chinese Malaysian politicians, and even suggested that one of them, parliamentarian Teresa Kok, should be killed.

This steady erosion of tolerance is more than a political challenge. It’s an economic problem as well.

Once one of the developing world’s stars, Malaysia’s economy has underperformed for the past decade. To meet its much-vaunted goal of becoming a developed nation by 2020, Malaysia needs to grow by 8% per year during this decade. That level of growth will require major private investment from both domestic and foreign sources, upgraded human skills, and significant economic reform. Worsening racial and religious tensions stand in the way.

Almost 500,000 Malaysians left the country between 2007 and 2009, more than doubling the number of Malaysian professionals who live overseas. It appears that most were skilled ethnic Chinese and Indian Malaysians, tired of being treated as second-class citizens in their own country and denied the opportunity to compete on a level playing field, whether in education, business, or government. Many of these emigrants, as well as the many Malaysian students who study overseas and never return (again, most of whom are ethnic Chinese and Indian), have the business, engineering, and scientific skills that Malaysia needs for its future. They also have the cultural and linguistic savvy to enhance Malaysia’s economic ties with Asia’s two biggest growing markets, China and India.

Of course, one could argue that discrimination isn’t new for these Chinese and Indians. Malaysia’s affirmative action policies for its Malay majority—which give them preference in everything from stock allocation to housing discounts—have been in place for decades. So what is driving the ethnic minorities away now?

First, these minorities increasingly feel that they have lost a voice in their own government. The Chinese and Indian political parties in the ruling coalition are supposed to protect the interests of their communities, but over the past few years, they have been neutered. They stand largely silent in the face of the growing racial insults hurled by their Malay political partners. Today over 90% of the civil service, police, military, university lecturers, and overseas diplomatic staff are Malay. Even TalentCorp, the government agency created in 2010 that is supposed to encourage overseas Malaysians to return home, is headed by a Malay, with an all-Malay Board of Trustees.

Second, economic reform and adjustments to the government’s affirmative action policies are on hold. Although Mr. Najib held out the hope of change a year ago with his New Economic Model, which promised an “inclusive” affirmative action policy that would be, in Mr. Najib’s words, “market friendly, merit-based, transparent and needs-based,” he has failed to follow through. This is because of opposition from right-wing militant Malay groups such as Perkasa, which believe that a move towards meritocracy and transparency threatens what they call “Malay rights.”

But stalling reform will mean a further loss in competitiveness and slower growth. It also means that the cronyism and no-bid contracts that favor the well-connected will continue. All this sends a discouraging signal to many young Malaysians that no matter how hard they study or work, they will have a hard time getting ahead.

Mr. Najib may not actually believe much of the rhetoric emanating from his party and his government’s officers, but he tolerates it because he needs to shore up his Malay base. It’s politically convenient at a time when his party faces its most serious opposition challenge in recent memory—and especially when the opposition is challenging the government on ethnic policy and its economic consequences. One young opposition leader, parliamentarian Nurul Izzah Anwar, the daughter of former deputy prime minister Anwar Ibrahim, has proposed a national debate on what she called the alternative visions of Malaysia’s future—whether it should be a Malay nation or a Malaysian nation. For that, she earned the wrath of Perkasa; the government suggested her remark was “seditious.”

Malaysia’s government might find it politically expedient to stir the racial and religious pot, but its opportunism comes with an economic price tag. Its citizens will continue to vote with their feet and take their money and talents with them. And foreign investors, concerned about racial instability and the absence of meaningful economic reform, will continue to look elsewhere to do business.

There you have it. Thank you.

27 thoughts on “John Mallot: Malaysia is a terrible, unsafe country”

DISCLAIMER: Jebat Must Die carries the personal views of the blog authors. Readers are cautioned not to consider the contents written in this blog and all its ancillary documents as a legal or contracting policy advice in any way. Indeed, the information stated in this blog should not be relied upon as the ultimate reference of the truth. They are just a matter of opinion based on available facts. Since Jebat Must Die is not responsible for its contents and the comments from the public, it therefore assumes no liability. Jebat Must Die also disavows knowledge or culpability of any such acts or claims on such acts in any way related to the views and opinions expressed in this blog.
Follow jebatmustdie on WordPress.com
Loading Comments...
Comment
×
%d bloggers like this: